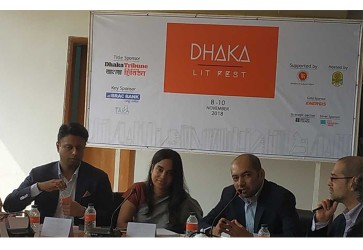 8th Dhaka Lit Fest set to kick off on Thursday

Cultural Affairs Minister Asaduzzaman Noor will inaugurate festival as the chief guest, organizers of the event came up with the information at a press conference held at Bangla Academy on Monday.

Over 200 writers, performers and thinkers will take part in the 3-day long event comprising over 90 sessions.

Shirshendu Mukhopadhayay, the phenomenal West Bengal author, will also attend the event despite his illness.

Besides, actress-filmmaker Nandita Das will talk about her newly released acclaimed film Manto at the event,  said the organisers.

Other programmes of the festival include book launching, cultural performances, writing workshops, interactive panel discussions and creative sessions for children, said the organisers.

Cambridge short story prize will be awarded at the festival for the first time in Bangladesh.

Highlighting the significance of the festival, Anis Ahmed, one of the directors of DLF, said the festival is an attraction for the invitees from abroad who are amazed by our activities and hospitality which takes the image of Bangladesh to a new height.

He further said that they have already taken up a task of translating ample number of Bangla books for the readers of other languages.

Sadaf Saaz, Director & Producer of the event said, more than 300 foreign guests attended the event from 50 different countries over the past seven years  and this year around 40 writers, thinkers and performers from 15 countries will be present at the event.

Zafar Sobhan, Editor of Dhaka Tribune, termed Dhaka Lit Fest as ‘Touchstone of Excellence’ and said it is not only the most prime literature festival in the region but in the whole world which shows Dhaka is second to none in holding a world class literary event.

8th Dhaka Lit Fest is hosted by Bangla Academy with Dhaka Tribune and Bangla Tribune as the Title Sponsors while Brack Bank is the key sponsor along with British Council, a strategic partner of the event.

Orgnisers said  tight security measures have been taken centering the event and no bag larger than 5"×10" will be allowed to carry.